EXCLUSIVE: John Lewis & Partners' decision to set a net-zero target before the UK Government enshrined its 2050 target into law evidences the fact that sustainability and profitability now go hand-in-hand, the retailer's director of corporate responsibility has claimed. 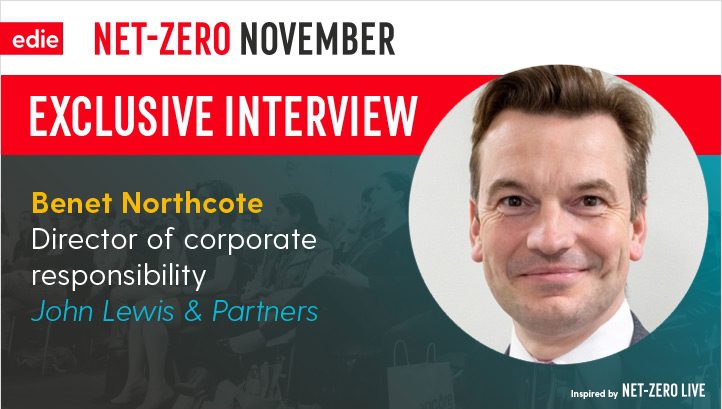 If a week is a long time in politics, nine months can seem like an eternity. Back in March, the UK Government – and, indeed, members of the green economy across the board – were eagerly awaiting the publication of the Committee on Climate Change’s (CCC) advice on legislating for a national net-zero economy.

Ministers had requested the advice after the Intergovernmental Panel on Climate Change’s (IPCC) landmark report into global warming last October concluded that, in order for the world to meet the Paris Agreement’s more ambitious 1.5C trajectory, net global emissions would need to balance at zero by mid-century.

But before the CCC’s recommendations were broadly enshrined into law in June, a handful of businesses were forging ahead and setting their own net-zero strategies in anticipation of policy changes. Among them was John Lewis & Partners, which pledged to achieve net-zero operational emissions by 2050 without the use of offsets.

Nine months on from the launch of John Lewis & Partners’ net-zero commitment, the firm’s director of corporate responsibility Benet Northcote explained that the decision to set the ambition was compounded not only by the ever-changing climate science and green policy spheres, but also through a desire to help align decarbonisation with economic opportunity – both for John Lewis Partnership and for UK Plc more broadly.

“It’s important to understand that asking what the reputational case [for sustainability ambitions] is isn’t the starting point for the board; it’s understanding the financial case,” Northcote, speaking ahead of his appearance at edie’s 2020 Sustainability Leaders Forum (scroll down for details) said.

“What we’re trying to show by leading is that it is possible to have an ambitious net-zero plan and to be profitable at the same time. One hopes that by pioneering, one can help drive down the cost for others as well.”

In order to meet this ambition, the company will need to make a string of investments in low-carbon technologies such as biomethane trucks, electric vans and energy-efficient fridges, as well as the sourcing of more clean power through onsite arrays and power purchase agreements (PPAs).

One of the areas in which John Lewis & Partners is succeeding in proving the business case for substantial low-carbon investments is its fleet. The retailer’s parent company John Lewis Partnership is in the process of converting its 500-strong fleet of diesel delivery trucks to be powered by bio-methane by 2028, as announced on edie’s Mission Possible Pledge Wall last year, with key supplier CNG Fuels having recently unveiled plans to develop ‘carbon-negative’, manure-based fuels by 2021.

Northcote explained that while the financial considerations of this transition will differ from the retailer’s previous diesel truck purchases, the shift to bio-methane will ultimately deliver “significant” benefits across the lifecycle of the vehicles – during which time, policies around transport emissions are set to be fleshed out and further grants and incentives for electrification and innovative fuels launched.

Given that bio-methane trucks will not be an affordable or impactful solution for businesses of all sizes and sectors, Northcote’s advice for replicating this particular scheme’s success is to “think as broadly as possible” when building the business case, focusing not only on upfront cost and short-term returns but on lifecycle benefits and the ways in which policy is likely to shift in the long-term.

“Net-zero by 2050 is obviously a big goal and one which can be quite intimidating, but you can start by asking, when your next investment decision is in front of you, which option is lower carbon than the others and how you can head that way not just in that decision, but in all future decisions the business is making,” he said.

“If you run a carbon lens over every decision you make, you can help change thinking. This may be a challenge because… business-as-usual technology is often still cheaper upfront. But, invariably, this won’t be true over the whole lifecycle; you need to capture the benefits more broadly.”

Northcote additionally emphasised the fact that John Lewis & Partners’ backing of bio-methane trucks has largely resulted from this particular technology maturing in recent years, and urged other sustainability teams to explore technologies and energy efficiency gains which are already there to be had.

While the shift away from HGVs is one which John Lewis & Partners has been able to accelerate rapidly, there are other focus areas in which progress is likely to come later – be that because of technology immaturity, policy barriers or a need to work collaboratively with other stakeholders.

According to Northcote, two focus areas which fall into this category are refrigeration and the transition to 100% British-generated renewable electricity for stores, offices, distribution centres and other UK facilities.

On the former, the phasing out of inefficient fridges will primarily take place when new stores are opened or existing locations retrofitted, Northcote explained, while trials to address cooling-related emissions generated by refrigerated trucks are still ongoing. Such trials include the exploration of vehicles which run the refrigerator off of the cab rather than separately, therefore boosting efficiency and potentially enabling energy which would otherwise be wasted to be re-captured.

On the renewable electricity piece, Northcote added, John Lewis & Partners’ portfolio includes a number of stores within shopping centres or retail parks whereby the responsibility for energy procurement lies with the landlord or another third party. The retailer is not alone in facing this challenge; edie’s recent survey in association with Big Clean Switch and The Climate Group’s RE100 initiative found that 69% of commercial occupiers find it challenging to engage landlords with the switch to renewables.

“While… we can’t put these locations on to a 100% British renewable tariff ourselves, what we can do is, as leases come up for renewal, build decarbonisation into the re-negotiation conversations,” Northcote said.

In addition to the conversation piece, Northcote emphasised the importance of the interim targets within John Lewis & Partners’ 2050 strategy. The 100% renewable electricity target has been set for 2028, for example, as has the ambition to cut operational emissions by one-third, against a 2017 baseline.

“We clearly don’t have a set roadmap for every investment decision between now and 2050, because we don’t know what size, shape or position the business will be in,” he said.

“But what we have done is developed a series of interim targets across a range of specific areas… having these firm interim targets will be key to ensure we’re always getting nearer to the overall aim.”

These latter comments come at a time when many businesses are asking the Government for shorter-term policy frameworks in specific areas of the national economy – but with the approach of some departments currently at the “plan to make a plan” stage, perhaps some of these shorter-term milestones could now be led by business, not policy.

John Lewis & Partners’ director of corporate responsibility Benet Northcote will be appearing at day one of edie’s Sustainability Leaders Forum 2020, to co-deliver a session on taking the net-zero discussion from “what” to “how”, along with representatives from Taylor Wimpey, Signify, The Green Finance Institute and EDF Energy.