Driving change: What will the planet's roads look like in 2050?

From algae refuelling stations to wildlife bridges, the roads of the future will not just be inanimate slugs of concrete, but an important part of an emissions-free planet. How will we get there? Brad Allen finds out.

In many developed countries, transport is the only sector where emissions are still rising, thanks to ever more cars being piled onto the road.

While the uptake of electric cars is picking up momentum, many motorists say the lack of refuelling infrastructure is what’s stopping them from making the leap to a plug-in vehicle.

This is just one of the problems faced by Innovia – a Cambridge-based innovation company that was recently given a 16-mile stretch of road in the deep American South and told: "make this a zero-impact road."

The project, known as 'Mission Zero Corridor' project, throws up a panoply of other problems; from the obvious vehicle CO2 emissions to the noise and light pollution, to the energy needed to run traffic and street lights, to the materials used to build and maintain a road.

But for Innovia’s project leader Andy Milton, the sheer breadth of the challenge is actually a plus.

“It gives us tremendous opportunity to experiment,” says Milton. “There are no specific targets, so we’re aiming at broad sustainability, whether that’s increasing the life of the road itself, reducing energy use, or reducing impact on the local environment.”

That flexibility also means that Innovia is willing to throw its stretch of road open to innovators around the world. “We are definitely interested in hearing from people who want to try their technology on our road,” Milton adds.

“One of our key goals here is to attract additional investment into these new technologies and encourage more ideas sharing. We want to excite by demonstrating the potential.”

Because the length of the project is expected to run into decades, Milton has had to initially prioritise more readily-available technologies.

“One of the big things we are currently looking at is solar power,” he says. “There is a lot of land surrounding the road, so we’re considering solar panels on grass verges, along the central reservations, at intersections and even under the road, as you might have seen elsewhere.”

That solar energy could be used to power the lights, but Milton says there is enough land around the road - Interstate 85 in Georgia - that energy could feasibly be exported to the grid.

A wildlife bridge in Belgium 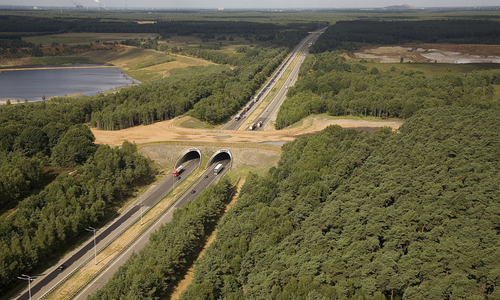 As for the road itself, Milton says Innovia is looking into early pilot that looks to use recycled plastic bottles to bind the road aggregate together. Ironically, even that circular economy solution could be rendered moot by some of the other, more space-age ideas that Innovia is considering, such as self-healing asphalt.

First suggested by Eric Schlangen in a Ted Talk, self-healing asphalt is made when regular asphalt is mixed with steel wool before being laid. When the roads starts to crack over time, an induction heater is driven over it, warming up the steel, melting the asphalt, which flows into cracks, thus ‘healing’ itself.

As the Mission Zero Corridor project continues, Milton expects to take on more of these ambitious trials, such as driverless electric cars or refuelling stations that can create biodiesel from nearby algae ponds.

“These algae biofuel stations are interesting,” says Milton. “Because we think it’s feasible, but we’re not sure if it’s optimal. Ideally you’d grow algae where there’s a lot of sun and in a place where you can’t grow food, and that’s not necessarily next to a highway, so we’re still looking at that”.

Innovia is also “watching intently” to see the results of a Highways England pilot which will see roads fitted with wireless charging technology for electric cars. Indeed, sharing the results of that sort of trial with innovators around the world is something that’s all too lacking in the current infrastructure industry, according to Milton.

“We find that road building and these new technologies are very specific in each country. They all have their own ways of doing things. We think there’s great potential in bringing a lot of these ideas together.”

Drawing on one of the staples of UK motorways for example, Milton envisages a futuristic twist on the “Don’t drink and drive” warnings that line the nations motoring arteries.

“More than 60% of road users drive around with underinflated tyres,” he says. “What if we could put plates in the road that you could drive over and a sign would flash up telling you: 'You’re underinflated, pull over at the next stop for free air’? We could save a lot of fuel that way.”

Tearing up roads to install pressure gauges, solar panels and self-healing tarmac probably sounds like a dream to many visionary engineers, but Milton and Innovia are at the confluence of a unique set of circumstances.

The stretch of highway that Innovia will work on – exits 2 to 18 on Interstate 85 in Georgia – is not a random chunk of tarmac. In fact it has a name. It is known as the Ray C. Anderson Memorial Highway, so-called after the late founder of flooring manufacturer Interface. 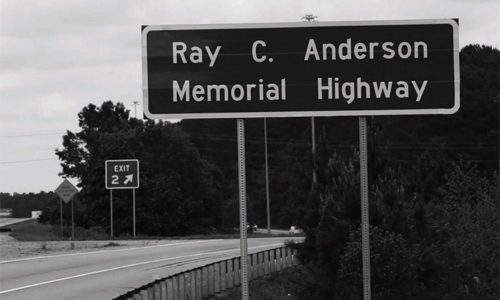 That explains the project title - Mission Zero Corridor - which comes from Interface’s own 'Mission Zero' initiative which commits the company to having no environmental footprint by 2020.

Interface has therefore brought its considerable sustainability expertise and corporate funds to the table, and helped get the Georgia Department of Transport onboard, who Milton says are keen to reap the reputational and environmental benefits of a zero-impact road.

However, they also provide a slight check on Milton’s imagination. “They’re obviously very concerned with safety,” he says. “We can’t just install solar panels into the road and see if cars slip off, so safety is absolutely critical to anything we implement.”

Seemingly the only other hindrance to the success of the project is the long-term viability of the very concept of a road.

When asked whether public transport systems like Maglev trains or Elon Musk’s proposed Hyperloop would eventually replace the need for long-distance highways, Milton said he thought roads would have a role to play for ‘many tens of years yet’.

“Think about where cars are going,” he said. “These renewably-powered driverless cars could be slipstreaming each other around in ‘road trains’, picking people up and taking them where they need to go.

VIDEO: An early example of a driverless 'road train'