Conservation charity WWF has teamed up with facilities manager and food services provider Sodexo to launch a new range of 10 'sustainable' meals.

The Green & Lean meals, developed jointly by WWF experts and Sodexo chefs, are designed to be nutritious and low-carbon with responsibly sourced ingredients.

At least two thirds of every meal is made up of plant-based foods in order to limit the impact of resource-intensive meat production. In addition, any meat and fish has to have relevant certification, such as MSC or RSPCA Assured.

The meals – including beef lasagne, chicken and leek pie and Lancashire hotpot – are being piloted over the next few weeks in eight of Sodexo’s independent school contracts.

Sodexo’s executive development chef for Independent Schools, Tom Allen said: “It was really important that the meals we created tasted great. The idea was to make small changes to popular, well-loved dishes that would up the nutritional content and reduce the environmental impact, without dramatically changing the taste or the look of the dish. 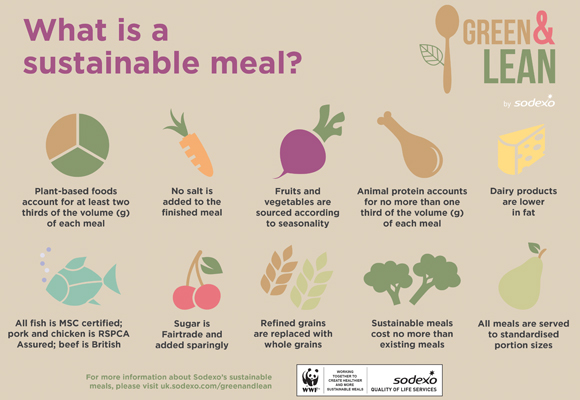 Emissions from livestock, largely from burping cows and sheep and their manure, currently make up almost 15% of global emissions. Beef and dairy alone make up 65% of all livestock emissions.

Appetite for meat is rocketing as the global population swells and becomes more able to afford meat. Meat consumption is on track to rise 75% by 2050, and dairy 65%, compared with 40% for cereals.

The impact on global water stores could be equally harmful with around 23% of the planet's freshwater supply already going towards raising livestock.

Following the pilot, Sodexo intends to market the meals under the Green & Lean brand to other clients in the schools and universities sector, and within its corporate services business, which operates canteens in some of the world’s biggest companies.

WWF spokesperson Nick Hughes said: “The food we eat – growing, producing and consuming it – has a massive impact on the planet. We have found that food is responsible for around 30% of Europe’s greenhouse gas emissions.

"Through LiveWell we aim to provide simple, workable guidance on choosing a diet that can improve your health and that of the planet at the same time and is also affordable. It is great that these principles can be applied to meals like lasagne and chicken pie and we are hopeful that Green & Lean will be successful.”

LiveWell is not the first campaign to attmept to reduce the environmental impact of people's food choices. Earlier this year Climates - a new environmental social networking site - launched its Climatarian diet which it claims  can save up to a tonne of CO2 per year for each person.

The social network says cutting back on beef and lamb can have a dramatic effect on your food’s carbon footprint. The Climatarian diet also recommends avoiding using air freighted food and frozen produce, instead only purchasing local, seasonal and fresh produce.

The impact of food on the environment has been thrust into the spotlight in recent weeks after the BBC show Hugh’s War on Waste highlighted the amount of valuable resources that go into creating food that is thrown away all too often.