Renewable electricity generation up 33% in 2011

Electricity generated from renewable sources in the UK increased by 33% in 2011 compared to the previous year, while energy production fell by a record 13.2%.

Electricity from renewable sources is rising significantly in the UK

"On the basis of the policy measurement of the contribution of renewables eligible under the Renewables Obligation to UK electricity sales, 2011 showed a 2.7 percentage point increase, from 7.0% in 2010 to reach 9.7%in 2011," said DECC. 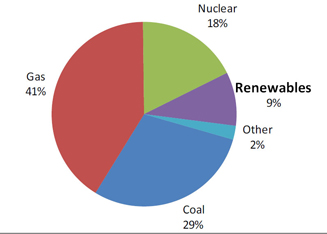 DECC added: "Installed electrical generating capacity of renewable sources [also] rose by 33% in 2011, mainly as a result of solar photovoltaic capacity increasing by 12 times due to high uptake of Feed in Tariffs, a trebling of biomass capacity due to the conversion of Tilbury power station from coal to dedicated biomass, and a 37% increase in offshore wind capacity".

However, due to the fall in oil and gas production trade and professional body for the wind and marine energy industries, RenewableUK, pointed out that the regions reliance on imported fossil fuels hit a record 36 year high.

Maria McCaffery, Chief Executive of RenewableUK said: "These figures highlight the increasingly crucial role that wind and other forms of renewables are playing in the UK's energy mix. This trend is set to continue and will help the UK to reduce its over-reliance on expensive and unpredictable supplies of imported fossil fuels.

"With the economy in a fragile state we need to do everything we can to boost investor confidence and ensure that the UK develops an energy mix that will not only protect consumers from fluctuating fossil fuel prices in the short term but will also deliver long term security and growth."

A spokesperson for DECC told edie that the statistics clearly show that the region is moving towards a more renewable energy efficient future and that the rise in imported fossil fuels has been largely due to dwindling resources from the north sea.