Reports: Trump set to announce US withdrawal from Paris Agreement

Reports have emerged detailing that US President Donald Trump has decided to withdraw the nation from the Paris Agreement, with a "small team" of executives deciding on the formal exit route. 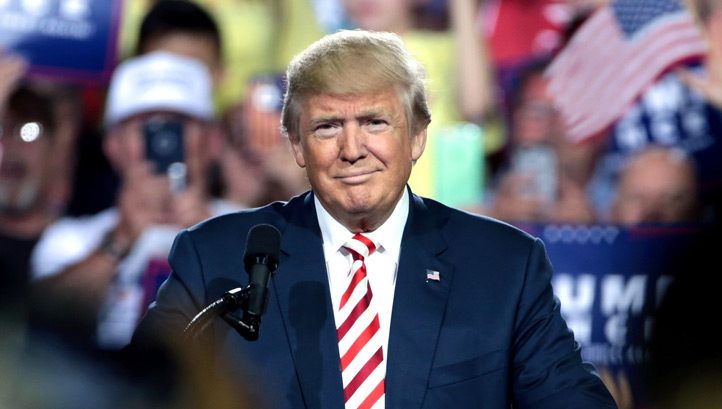 A letter sent from 22 Republican Senators was said to have reinforced Trump’s desire to withdraw  Image: Gage Skidmore/Flickr

According to US media outlet Axios, Trump has finally decided to withdraw from the historic climate accord after months of delaying the decision.

“President Trump has made his decision to withdraw from the Paris climate accord, according to two sources with direct knowledge of the decision,” Axios states. “Details on how the withdrawal will be executed are being worked out by a small team including EPA Administrator Scott Pruitt. They’re deciding on whether to initiate a full, formal withdrawal — which could take three years — or exit the underlying United Nations climate change treaty, which would be faster but more extreme.”

Trump had pledged to pull-out of the global climate deal as part of his campaign, and despite numerous messages from businesses and investors, believed to be worth £11bn, urging him to stay in the Agreement, it has been claimed that a letter sent from 22 Republican Senators had reinforced Trump’s desire to withdraw.

I will be announcing my decision on the Paris Accord over the next few days. MAKE AMERICA GREAT AGAIN!

There is a lengthy legal process for withdrawing from the Paris Agreement. Parties can only withdraw once the three-year period since it entered into force has been passed – meaning the earliest withdrawal via this route would be November 2019.

However, withdrawing from the United Nations Framework Convention on Climate Change (UNFCCC) would only require one years’ notice, and would subsequently trigger a departure from the accord.

The decision would unravel much of the work of Trump’s predecessor, Barack Obama, who strived to get the world’s second largest emitter to agree to the Paris Agreement alongside China. Between Trump’s inauguration and the end of April, the Whitehouse has 77 executive actions, many of which seek to reverse Obama’s US climate and environment actions.

Attention may now turn to the UK, to see how the new Government responds to the decision as it attempts to secure new trade deals and readies ithe nation for the departure from the European Union (EU).

On Tuesday (30 May), Labour Shadow Secretary Barry Gardiner accused the Tories of “sucking up” to US President Donald Trump in spite of his unwillingness to support the Paris Agreement. Gardiner claimed it was a “disgrace” that the UK hadn’t criticised the US for threatening to pull out of the Agreement.

Reacting to the reports, Friends of the Earth’s chief executive Craig Bennett said: “The next five years are a watershed moment for our climate. Only if we act now can we hope to prevent catastrophic climate change destroying homes and livelihoods here in the UK and fuelling starvation and refugee crises across the globe.

“This short-sighted and dangerous decision will be met by opposition around the world: from ordinary people, to scientists, and political leaders – making the US a global outcast. Whoever becomes the next UK Prime Minister, they must now step up on climate action and show that our ‘special relationship’ with the US cannot extend to supporting a nation that would so flippantly jeopardise the climate for future generations.”

Earlier this month, the new Secretary-General of the United Nations (UN) Antonio Guterres encouraged the US to remain in the Paris Agreement. However, he suggested that the climate agenda would be driven by businesses regardless.

“I can only encourage all countries, and of course the US, to stay in the Paris Agreement,” Guterres said. “But today, governments are not the only entities that matter in climate change. We have seen more and more that those who are betting on technologies that allow us to fight climate change will be those that dominate the economy of tomorrow.

“I am a strong believer in the dynamism of the business community, the cities, the states, the American society, to make sure that the US stays the course in relation to the reduction of emissions.”

The Energy and Climate Intelligence Unit’s (ECIU) director Richard Black added: “Pulling out of the Paris Agreement or the underlying UN climate convention would be a serious issue both for the US and the rest of the world – the US is the second-biggest emitter of greenhouse gases, so a deal without it is necessarily weaker than one with it, and it would increasingly isolate the US diplomatically.

“However, all the other important countries – China, India, Germany, France, the UK – have been at pains to signal their continued commitment to the Paris Agreement. And whatever policies President Trump enacts at home, the huge strides being made on clean energy in all those countries will continue to pull costs down, in turn steering US investment further away from fossil fuels.

“A pullout would also widen the diplomatic rift with Europe that emerged at the G7 summit, and could even lead to trade barriers being erected against US exports and the developing world would be even less impressed.”