As thousands of new gadgets vie for attention at the Consumer Electronics Show (CES) in Las Vegas, edie profiles nine of the most exciting cleantech innovations that could be poised to take off in 2016.

Futuristic EVs, innovative solar concepts and zero-carbon cities are all on the horizon

Past the robots, smart clothes and a fridge that uses a smart screen instead of having to see what's inside for yourself (we’re still trying to figure out the need for that one), some truly sustainable innovations sit on the show floors at CES 2016.

The much-hyped Faraday Future electric vehicle (EV) concept, for example (see below), has turned heads in Vegas; sparking more conversations about the need to accelerate the move to all-electric transport. Water-saving showers, smart-home apps and hydro-powered gadgets have also had their share of the limelight.

This got the edie team thinking: What other green innovations are set to spread their wings during 2016? And will any of them unlock the key to achieving those ambitious emissions reduction goals set out at the end of 2015 in Paris?

The build-up to CES 2016 was flooded with rumours that Apple was set to announce its own EV concept. Sadly, they appear to be unfounded.

Instead, attendees were greeted with Faraday Future - a 'secretive', California-based EV start-up that finally removed the sheets on its 1,000 horse-power racescaresque vehicle.

While the reveal is still only a concept, Faraday has stated its ultimate desire: to compete with Tesla’s Model S. Placing electric motors at each wheel, it will be interesting to see how the current 'shared innovation' ethos in the EV industry – Tesla recently denounced all desires to patent its technology – will develop amidst the growth of a EV market.

A number of other innovative EV concepts have been unveiled this week at CES, indicating that 2016 could be the year that EVs shift from the eco-conscious to the must-have mainstream.

At the end of last year, edie profiled another “game-changing” electric vehicle firm: Uniti. The futuristic Uniti car concept believes it holds the key to unlock millennial’s interests and drive trust back into the market. The company is currently developing a prototype EV that “goes beyond batteries and mileage” and looks at the whole lifecycle of a car, with a more purpose-built design.

Sea levels may be rising but the planets surging population coupled with climate change consequences has seen water scarcity grow from a small pond of concern to an ocean of panic.

Innovators at CES have highlighted numerous shower systems that actively tell an individual when their shower habits exceed a certain number of litres of water. 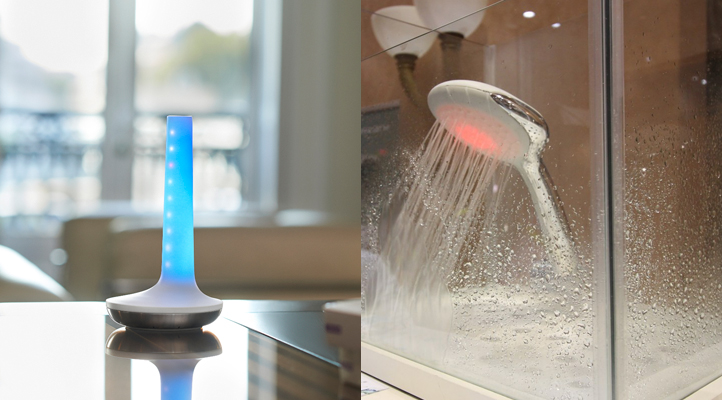 Orbital Systems has already introduced a shower capable of producing water savings of 90%, coupled with energy savings of 80%. A brief look through this emerging market will highlight numerous ways of using colours, graphics and noises to show users when they are close to exceeding limits.

With companies – especially in the agricultural sector – seeking new ways to cut down on water footprints in supply chains, 2016 could allow those sourcing raw materials with a means to measure their water use.

A New Year often brings about a new you (at least until mid-February). For most, this means pounding the pavements and hitting up the treadmill, but for others, 2016 could be the beginning of a new low-carbon lifestyle.

Carbon trackers began to emerge in 2015 and the market has really pushed on, introducing new online portals to calculate current carbon expenditure and how much you’d like to reduce it by.

While there are wearable models that track car use and food intake, whole-home systems are now available that not only tracks the energy use of your home but provides online platforms and remote apps that can lower energy use at certain times.

With apps and wearable tech at an all-time high, 2016 certainly looks set to be a big year for the carbon-conscious.

As previously mentioned, it’s never been easier to completely track energy use and carbon expenditure. With this new knowledge in mind, a number of zero energy buildings are sprouting up across the globe.

A four-bed house has been built in Yorkshire using a unique energy system allowing it to generate more than 13,000kWh of electricity and heat a year – enough to power itself and two neighbours. Coffee shop chain Costa also opened its first 'zero-energy' coffee shop last year - a potential game-changer for green building design.

While zero-carbon requirements for new-builds and retrofits were scrapped by the UK’s Government in 2015, more and more developers and businesses are taking it upon themselves to become not just 'net-zero' in building design but also carbon-positive in operations – just take a look at Unilever.

The zero-carbon concept has been an ongoing development since 2008 when architects Foster & Partners began construction on the zero-carbon city Masdar in the UAE. Mooted for completion by 2020, expect some big announcements on this over the coming 12 months.

Type the word 'solar' into edie’s search bar and you’d be forgiven for thinking that the sector is in turmoil. Yet, while cuts threaten to derail the sector here in the UK, start-ups from across the globe continue to release innovative and impressive ideas to up efficiency levels and lower costs for solar photovoltaics (PVs).

Manchester is already playing host to a floating solar panel ‘island’ while America could soon be fitted with more than two million acres of solar glass, which the developer claims to be 50 times more efficient than current solar PV systems.

With solar proving such an attractive market globally, expect 2016 to be filled with utility-scale installations, more efficient PVs and a variety of innovative and aesthetically pleasing solar-energy-capturing ideas.

Once the initial head-scratching over 3D printing is over, it’s impossible not to get carried away with the potentials of this revolutionary idea. Prototype 3D printed houses – with built-in solar panel systems that can also charge a car – have already been developed.

The idea of cheap construction and transportation of goods is promising enough for the environment, but the fact that a lot of materials used for 3D printing come from biodegradable filaments means that 2016 could see drastic amounts of waste reduced when it comes to constructing…well, just about anything.

Solar and wind energy are already extremely popular forms of generation, largely due to the domestic aspect of each. Another renewable source that can produce huge amounts of energy is 'hydro' and wave energy.

One of the standout wave energy schemes currently being developed is that of a €6m project to harnesses energy by mimicking the human heart. The 'HiWave' Wave Energy Converter is able to deliver five times higher wave energy absorption and has the potential to catalyse the wave energy market if it reaches wide-scale commercialisation.

The ideal wave energy harnessing method is still open for debate, which is why there is such a buzz in this sector. With Apple leading the way in exploring methods to capture the potential of wave energy, and the potential birth of Hydricity – a solar-hydrogen energy hybrid system – 2016 could be the year we finally conquer the oceans.

Rome wasn't built in a day but rather ancient brick by ancient brick. As a global empire that lasted for well over 200 years, this ethos is now seemingly being adopted in an extremely competitive and e-waste hungry mobile phone market. Late 2015 saw the European roll-out of the Fairphone 2 - a 'modular' smart phone created from responsibly-sourced materials.

The current upgrade-discard cycle of the smartphone industry is producing staggering amounts of problematic e-waste, but modular phones - fathered by the Phonebloks concept - are slowly revolutionising the need to upgrade phones.

Instead of leaving your old smartphone to collect dust in the fabled electronics drawer, modular mobile phones promotes longer life of devices by allowing particular parts to be replaced or upgraded individually.

Samsung is one of the few established brands taking this improved life-cycle concept to heart and 2016 could finally be the year that the 'smartphone must-have' is replaced with the 'smartphone already-have-it'.

Bringing the innovation trends round into a nicely closed loop is the ever-growing market of battery storage, driven largely by Tesla - battery storage is worth a potential $1bn to Elon Musk's company alone. The birth of Tesla's Powerwall battery and growth of its gigafactory are definite signs of a company with its fingers in all the right pies.

Despite the Powerwall arriving at UK shores imminently, there is still no single dominating battery storage type at present. The lack of durability of lithium based batteries has opened up markets for other materials to stake their claim as the energy storage king.

But could the future of energy storage extend beyond battery systems? While 2016 may be too soon, the not-so-distant future could in fact see paper, or even human waste become effective energy storage capsules.

As seen from these new ideas, innovation and emerging technologies have become essential building blocks for a sustainable future. Recognising this, edie Live has designed a competition specifically designed to promote and support innovation in the sustainability space.

Building on the launch of the Innovation Zone last year, we are looking for the best ideas that we can help turn into market-ready propositions.

Find out more about the 2016 Innovation Competition at edie live and submit your entry for FREE here.


© Faversham House Group Ltd 2016. edie news articles may be copied or forwarded for individual use only. No other reproduction or distribution is permitted without prior written consent.