'Sharing beauty for all': L'Oréal on track with environmental goals

L'Oréal has achieved a 43.1% reduction in absolute CO2 emissions and a 26.7% reduction in water per product since 2005, according to its 2013 sustainable development report.

L'Oreal has seen an absolute drop in water consumption of 7.7% since 2005

The French cosmetics group also increased waste recovery to almost 91% in 2013 with the aim of sending zero waste to landfill by 2020. In 2013, 54% of L'Oréal plants reported sending no waste to landfill. (Scroll down for full report).

The company is on the path to meeting its 2020 sustainability targets in its 'Sharing beauty for all' campaign, announced last October. The new targets outlined in the report aim for a 60% reduction in greenhouse gas emissions, a 60% reduction in water consumption per finished product and sending zero waste to landfill by 2020.

Water consumption, however, remains a central concern with only a 7.7% drop in absolute consumption compared with 2005; with conserving resources described as an 'ongoing challenge' in the report, even as the company continues to grow, increasing production by 6.8% against 2012.

The report highlighted environmental commitments across L'Oréal's supply chain. In Yichang, China, work has begun on a connection to the Zhifa Dam to power the plant on 100% renewable energy and at the company's largest factory in Jababeka, Indonesia, the introduction of further hydroelectric solutions will see the plant produce 60% of its energy from renewables.

L'Oreal's chairman and CEO Jean-Paul Agon acknowledged the challenge ahead, saying: "We know that much remains to be done, but we are determined to forge ahead via the 2020 commitments we have made. This is a vast challenge, which means a profound cultural change for our Group and the way it interacts with society." 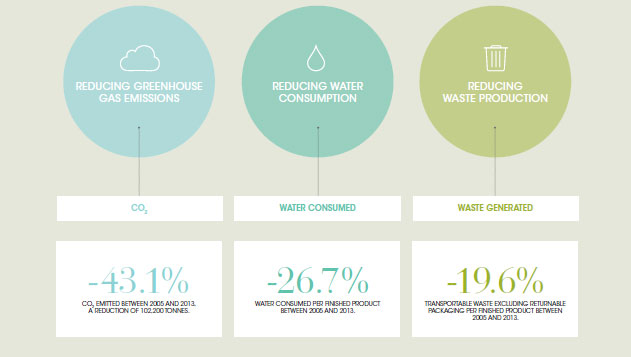 L'Oréal was recently ranked 22 in Interbrand's list of the top 50 green brands. In February, it also announced plans to improve its environmental impact and phase out the use of microbeads in its scrubs by 2017. Microbeads are thought to cause at least US$13bn damage to the ecosystem each year, according to the Plastic Disclosure Project.