Wales recycling rates on the up, England urged to take heed

Rising recycling rates in Wales have prompted calls for the rest of the UK to follow suit and develop clearer, more coherent national waste management strategies in order to reach EU targets.

Wales has shown the rest of the UK that reaching the 50% EU target is eminently achievable, according to Suez Environment

Wales has seen an eight-fold increase in recycling rates since the 7% rate it was achieving in 2000. The country is now well ahead of the statutory recycling target for local authorities of 52%, and comfortably past the EU’s target of recycling 50% of household waste by the end of the decade.

Welcoming the new figures, Natural Resources Minister Carl Sargeant said: “I congratulate householders and local authorities of Wales for this fantastic achievement, and I thank them for their commitment to recycling more and sending less waste to landfill than ever, maintaining our position as the best recyclers in the UK.

“This has been made possible by the strong partnership between the Welsh Government and local authorities across Wales.” 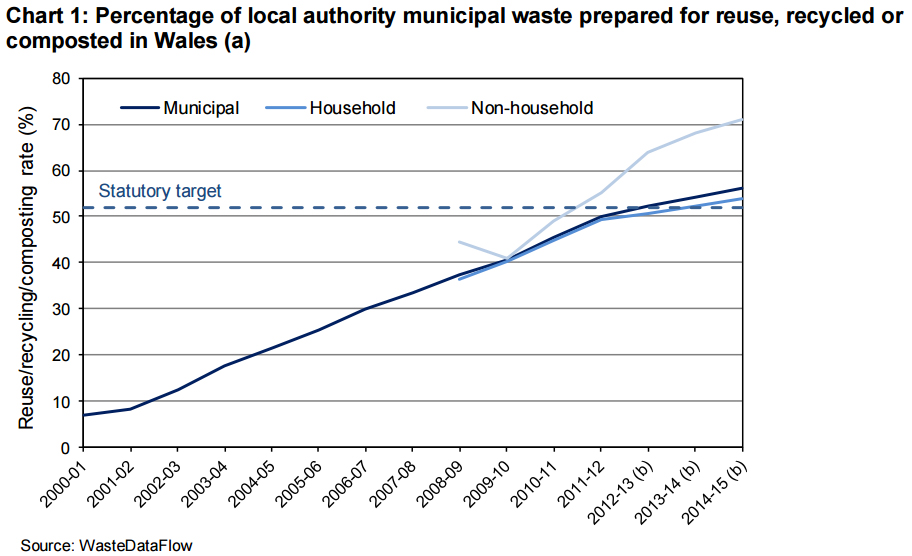 While Wales continues to succeed, England’s recycling rates have slowed significantly over the past three years. Latest figures from Defra show a slight increase from 44.2% in 2013 to 44.8% in 2014 – but this remains well below the UK’s 50% target, which will be largely dictated by England due to the weighting of population.

To ramp up recycling rates, David Palmer-Jones, chief executive of UK recycling and recovery firm Suez Environment, suggests that England should introduce mandatory separate food waste collections once a week, along with the collection of residual ‘black bag’ waste fortnightly.

“Together, these two new schemes could add 6% to local authority recycling rates,” Palmer-Jones said. “The big question however is whether the country’s policy-makers and waste mangers are prepared to implement these changes in time,” he said.

“England’s annual recycling rates are due out in the next few weeks which may yet be the catalyst needed."