The industrial and commercial sectors could see a 30-45% increase on energy bills to 2030, according to latest projections from the independent Committee on Climate Change (CCC).

Commercial sector energy bills will increase by 31% and industrial sector bills by 26% to 2030 due to low-carbon policies.

However, 'while all energy users have experienced large increases in both electricity and gas prices since 2004, the majority of this change is unrelated to low-carbon policies' and is more related to 'increases in the wholesale price of gas.'

CCC states that these increases can be offset through energy efficiency measures, which can cut energy bills and may provide savings larger than those costs.

Head of climate and environment policy at EEF, the manufacturers' organisation, Gareth Stace says that it is vital for government to take a long-term approach to minimsing costs, especially for energy intensive industry.

"The report lays bare the potential impact of climate change policy on industrial energy prices over the next decade, estimating that it could add 100% to electricity bills by 2030. This would place serious competitive pressures on heavy industry.

"The package of protection measures announced by the Coalition Government could reduce these costs by around 80% but at present it does not stretch beyond 2019/20.

"It is crucial that in future industrial considerations are placed at the centre of energy policy formation, rather than something to simply tag on at the end," he said.

Table: Outlook for industrial price for electricity supplied from the grid 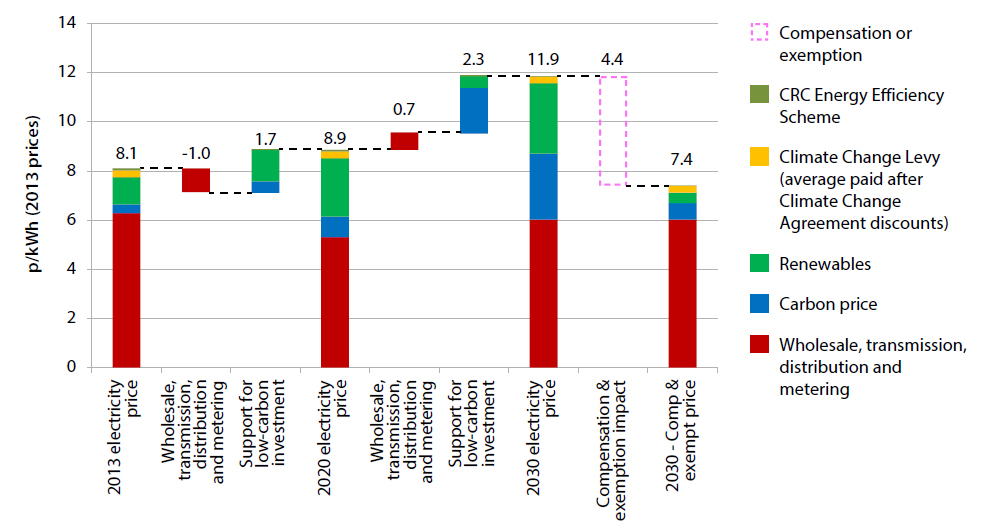 Commenting on the report, Friends of the Earth senior climate change campaigner Simon Bullock said: "There is a clear message for politicians - if they are serious about cutting the cost of punishing energy bills and tackling climate change, making the UK's heat-leaking housing stock energy efficient must rise rapidly up their to-do list.

"This report is further evidence that the last decade's whopping energy bill rises are overwhelmingly due to gas costs going up, not support for renewables - which has added just £35 of the £490 increase since 2004.

"Our bills would have been even higher, if not for cuts in energy consumption - energy saving has in fact been protecting people from the decade's stratospheric gas price rises."

Aldersgate Group executive director Nick Molho said: "This report from the Committee on Climate Change clearly shows that we can meet our carbon targets affordably, a conclusion that many other reports have also reached.

"To do so, the next Government must pursue energy efficiency policies to a much greater extent than has been done to date and show its support for the clean energy sector well beyond the end of this decade if businesses are to invest in our low carbon power stations at a reasonable cost.

"With the General Election fast approaching, our political leaders should remember that meeting our carbon targets isn't just about tackling climate change, it's also about equipping our nation with modern homes and building an efficient and low carbon energy system fit for the 21st century.

"Moving to a low carbon economy could unlock important employment and economic growth opportunities if the next Government shows a long-term commitment to this much needed transition and could significantly improve the UK's energy security by cutting its dependence on fossil fuels."