The UK's 'buoyant' utility-scale solar market could soon be the third largest in the world, according to industry experts.

In a new report, Wiki-Solar - an international commentator on utility-scale solar - found that the UK is currently the fifth-largest market in the world when it comes to utility-scale solar, which is defined as systems above 4MW. And the nation is set to embark on an installation spree in the coming months.

"Europe’s resurgence – after the 2012 policy changes in the traditional powerhouse of Germany – has been fuelled mainly by a buoyant British market," explained Wiki-Solar founder Philip Wolfe. "We predict that the UK will this month leapfrog India, and maybe even Germany, to become the world's third or fourth largest market."

The report highlights that Europe's utility-scale solar market returned to growth last year after downturns in 2012 and 2013. However, Wiki-Solar claims this uptick may not be sustainable, driven as it is by "a flood of projects racing to beat legislative changes". The UK then risks following other European markets into a period of stagnation, the report states.

The market will continue to be dominated by energy-hungry economic powerhouses like the US, China and India, says the report, as US solar capacity is projected to double by 2016 while China plans to have 100GW of solar power capacity installed by 2020, and India has a similar target for 2022. 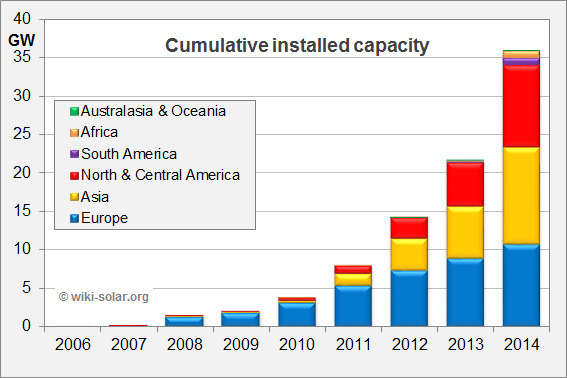 Here in the UK, Decc figures released in January showed that national solar generation – including small-scale systems – almost doubled over in 2014 with approximately 5GW of capacity installed by the end of 2014 compared to 2.8GW at the end of 2013.

Despite the promising figures, the solar industry has recently been vocal in its criticism of Government subsidies, claiming that the Contracts for Difference (CfD) auction tripped up the soon-to-be cheapest and most popular renewable source in favour of established technologies.