The Freevolt is reportedly the first technology on the market capable of extracting energy from routers and broadcast signals to charge low-power electronic devices.

“Whether we live in a big city or an increasingly urbanised area in the developing world, radio frequency waves are being generated all around us, at different levels, all the time,” said Lord Drayson.

“Some of this wireless energy goes unused. At Drayson Technologies, we’ve figured out a way to make it useful. We call it Freevolt.

“Companies have been researching how to harvest energy from WiFi, cellular and broadcast networks for many years, but it is difficult because there is only a small amount of energy to harvest and achieving the right level of rectifying efficiency has been the issue – up until now.

Drayson said the device could be used to power the various sensors, microcontrollers and wearables that make up the Internet of Things.

The first commercial application of Freevolt technology is the CleanSpace Tag air sensor, also developed by Drayson, which partners with a mobile phone app to allow users to visualize air pollution levels wherever they are. 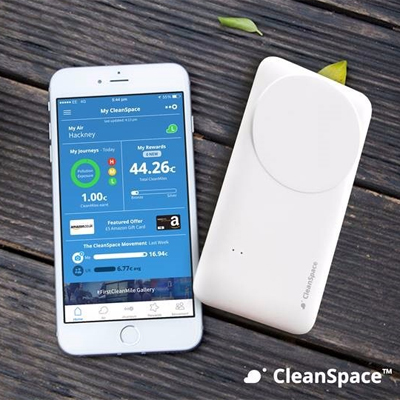 As they travel, they’ll see high-pollution zones in red, moderate in amber and low in green. Armed with this knowledge, users can plan cleaner routes and monitor their exposure over time.

The CleanSpace app also recognises when a member is making a  journey without causing any pollution – either by cycling, running or walking –and records these journeys as CleanMiles, rewarding clean journeys with free cups of coffee.

This CleanSpace movement aims to creates a crowd-sourced network of personal air sensors, initially across the UK all powered by mobile networks, WiFi signals and 3G. GSK, King’s College London, British Lung Foundation and BMW are all backing the movement.

Lord Drayson added: “Our vision is to show that in this age of hyper-connectivity, armed with the right technology, we can all work together to tackle global problems like air pollution. We’ve created CleanSpace to connect people and organisations to help make the air cleaner, now we need people to run walk and cycle with it.”

Air pollution is thought to contribute to more than 29,000 premature deaths each year in the UK.  In April the UK Government was ordered by the Supreme Court to improve air quality standards and reduce the levels of nitrogen dioxide in the atmosphere. The World Health Organisation (WHO) estimates the problem costs the global economy £53bn each year.

The CleanSpace movement is the latest consumer-led movement to try and tackle the air pollution issue, following in the footsteps of the ISpexEU campaign, which encourages smartphone owners to scan the sky for aerosol pollutants in ten European cities.