University of Gloucestershire ditches paper in favour of digital-only prospectuses

The University of Gloucestershire has made the decision to end the production of printed prospectuses for students and will now only offer digital versions in a bid to reduce resource consumption. 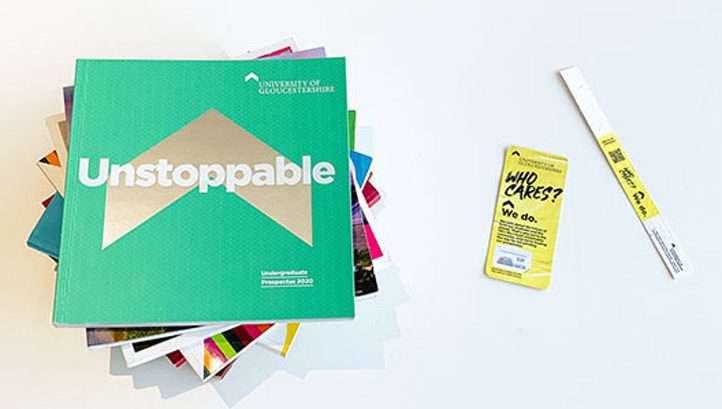 Research by the University of Gloucestershire found that around 2.5 million prospectuses are printed in the UK by universities annually

The University announced the decision on Monday (9 March), unveiling the digital-only versions at the UCAS Higher Education Fair in Bristol. Students visiting the university’s stand were given printed QR codes on wristbands to access more information about the university.

“Doing away with the traditional hard copy prospectus is a further step we can take in applying the principles of sustainability across everything we do. At the same time, we have taken the opportunity to rethink not just the communication medium but the content, to ensure we are giving students information about the things that matter to them,” the university’s vice-chancellor Stephen Marston said.

“Information about course content and academic management remains key. But so does information about some of the more personal aspects of being at university…At the University of Gloucestershire, we aim to be an academic community that values human relationships and the wider wellbeing of our students and community. Our Who Cares initiative reflects that goal.”

Prospectuses are traditionally printed and showcase what each university can offer students on courses, accommodation and other student factors. Research by the University of Gloucestershire found that around 2.5 million prospectuses are printed in the UK by universities annually, based on at least one prospectus per student. However, most students are more likely to search for specific information about universities online.

In response, the University of Gloucestershire worked with current undergraduate students to develop an interactive digital prospectus to replace the paper-based ones, as well as a range on Instagram stories to further engagement.

The University of Gloucestershire student’s union welfare officer Gemma Mainwaring said: “A digital university prospectus makes sense. As a community, we’re all so much more aware of reducing waste, so retiring the printed prospectus is definitely a move in the right direction. Students want their concerns on issues like sustainability heard and I think the University is responding to these concerns well.”

Last summer, the University of Gloucestershire was ranked as the most sustainable university in the UK.

Of the 154 universities listed, 33 received a “First Class Honours” ranking, with Gloucestershire taking the top spot and Manchester Metropolitan, Nottingham Trent, Northumbria and City, University of London, rounding out the top five.

Gloucestershire received an overall score of 80.6%, with People & Planet praising its efforts in achieving zero-waste-to-landfill status, divesting from fossil fuels and reducing its carbon footprint by 46% between 2008 and 2018.

The University was also praised for its work in integrating the Sustainable Development Goals (SDGs) into its course frameworks and for its ‘Live Smart’ scheme – a student-led programme which provides practical advice for students to help them minimise both their living costs and environmental footprint.

On edie’s Sustainable Business Covered podcast, Dr Alex Ryan, director of sustainability at the University outlined the key ingredients of a thriving sustainability strategy. Listen to the episode here.