A new shower that is 70% more water-efficient than regular models is nearing $1m of funding in its Kickstarter campaign less than 48 hours after launch.

Nebia’s campaign raised $100,000 to reach its original target in its first eight hours before driving on to half a million dollars within 15 hours.

The Nebia shower, which claims to save water and energy compared to standard shower technology, has more than 2,700 backers and support from Silicon Valley bosses, including Apple CEO Tim Cook and Google chairman Eric Schmidt.

The founders claim the shower could save an average Californian home of four 21,000 gallons of water per year, as well as saving $397.

The new shower came to fruition after co-founder and fitness company manager Carlos Andonaegui found his gyms were using high levels of water in their showers. Moving from Mexico to San Francisco, Andonaegui teamed up with Nebia Co-founder and CEO Philip Winter to begin working on the project.

"We set out to create a better shower experience first and save as much water as possible," said Winter. "It turns out the age-old belief that more water equals a better experience isn't necessarily true."

The Nebia has received testing support from Equinox Gyms, Google, Apple and Stanford University during development, with the first Nebia’s now expected to ship by early 2016. 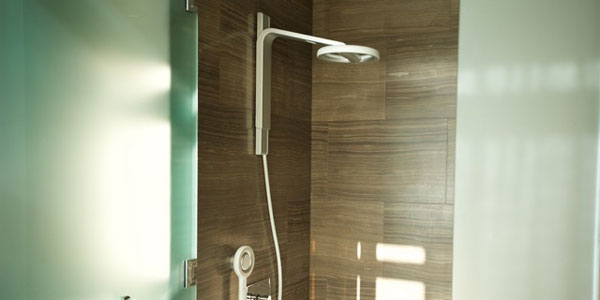 Upon reaching its $100,000 dollar target the Nebia team said: “We have been taking turns staying awake at the office as we see the orders flooding in. It’s great to see a large group of people who are excited about their showers and about saving water.”

The Nebia has received testing support from Equinox Gyms, Google, Apple and Stanford University during development, with the first Nebia’s now expected to ship by early 2016.

The company’s Kickstarter Youtube video also offers a challenge to California Governor Jerry Brown, who recently called on the state’s urban residents and businesses to cut their water use by 25% during California’s worst drought in recorded history.

“We challenge you, and leaders of other drought-stricken regions, to take a Nebia shower and install it in your home,” says the video.