Walkers has posted the first update on its nationwide crisp packet recycling scheme, revealing that more than 500,000 packets have been collected since its launch in December 2018. 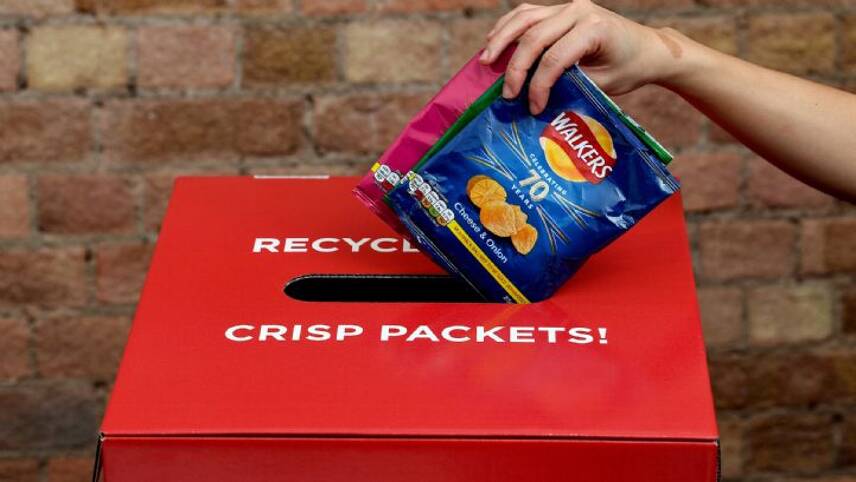 Under the scheme, PepsiCo subsidiary Walkers and recycling firm TerraCycle worked collaboratively to develop a recycling solution for crisp packets. The method involves cleaning and shredding the crisp packets, allowing them to be melted into small plastic pellets that can then be used to make new rigid plastic items such as garden furniture.

In order to collect a resource stream for this method, PepsiCo and TerraCycle pledged to install hundreds of public collection points across the UK within the scheme’s first three months of operation, with such take-back points accepting packaging from any crisp brand.

Posting a progress update on the scheme today (18 March), PepsiCo revealed that around 8,500 collection points have been installed across the UK to date. These facilities are typically hosted at locations such as shops, schools, community centres and offices. Consumers without access to a collection point are being encouraged to post their packaging to TerraCycle free of charge.

In total, the scheme has now collected more than half a million crisp packets. According to Walkers, this progress makes the scheme “the fastest-growing and most successful” recycling campaign to be launched by a UK brand.

“The public’s response to this scheme has been fantastic – but we know this is just the beginning,” Walkers’ corporate affairs direction Duncan Gordon said.

“We’re continuing to encourage people to get involved with the scheme by taking used packets to their local public collection point. Meanwhile, we’re also continuing in our ambition to make all our packaging 100% recyclable, compostable or biodegradable by 2025.”

The biggest contributor to the scheme so far has been Sussex-based recycler Sue Welfare, who has sent almost 50,000 crisp packets to TerraCycle for processing to date. These packets have been used to make 25 park benches.

The launch of Walkers’ scheme came after months of consumer protests against its hard-to-recycle packaging, which typically consists of a flexible plastic layer and metallised film.

The scrutiny began after analysis by campaign organisation 38 Degrees revealed last year that Walkers was set to produce an additional 28 billion plastic crisp packets by 2025.

This analysis spurred the launch of the #PacketInWalkers social media campaign, which saw thousands of customers posting their used crisp packets back to Walkers’ UK headquarters – often without envelopes and sometimes with letters calling on the brand to take more responsibility for what happens to its used packaging.

The campaign had the desired effect, with the likes of Environment Secretary Michael Gove, football legend Gary Lineker and Committee on Climate Change chair Lord Deben publicly voicing their support for the recycling scheme.

Before the #PacketInWalkers campaign had started, PepsiCo had already joined WRAP’s UK Plastic Pact, committing to make all of its plastic packaging recyclable, reusable or compostable by 2025. The food and beverage firm has since joined several other collaborative initiatives, including the Ellen MacArthur Foundation’s New Plastics Economy Commitment.