The Body Shop: Demands for plastic-free shopping have ‘come full circle since the 1990s’

EXCLUSIVE: The Body Shop's decision to begin offering plastic-free refills at its refurbished Bond Street store was largely driven by changing demands from its shoppers and staff, the brand's managing director has told edie. 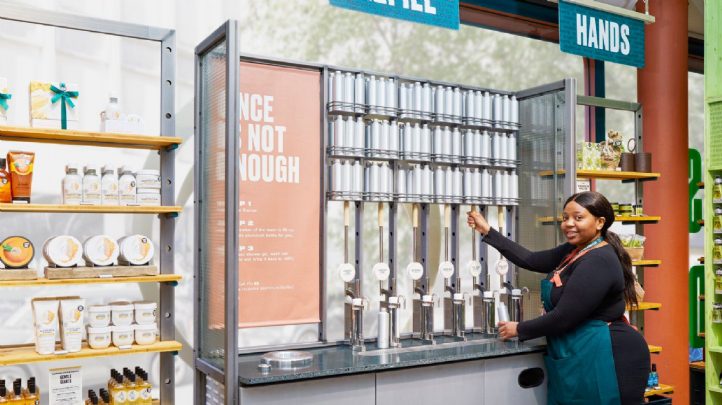 The refill station will open to the general public on Saturday (21 September). Image: OneGreenBean/The Body Shop

At a preview day for the store’s refurbishment on Tuesday (17 September), edie was given the opportunity to see the location’s new built-in sustainability features ahead of its general re-opening on Saturday (21 September).

The refit saw the store furnished with only upcycled and locally sourced materials, including worktops made from recycled plastics, shelves made from reclaimed wood and storage crates given a second life after a previous stint at a manufacturing site.

But, perhaps more innovatively, the store has also been kitted out with a new refill station for shower gels. The station consists of a sanitization chamber for 500ml aluminium bottles, fitted with UV-based sterilization technology, and several pumps, each dispensing a different scent of shower gel.

While the store will still be selling shower gels in a 100% recyclable 500ml plastic bottle format, these will be priced at £5, whereas a refill will cost £6 for the first bottle and £4 thereafter. Packaging-free shea butter will also be on offer.

Speaking exclusively to edie, The Body Shop’s managing director Linda Campbell said the brand’s only refill station in the UK at present was opened due to changing desires around packaging “from all sides”.

“We actually had refills in our stores around 20 years ago, but at that time, the customer retail environment was changing towards people not wanting refill at all,” she explained.

“Everyone, at that time, was moving to plastics. Now, that conversation has evolved to the point that customer demands have come full circle. We’re responding to demand not just from shoppers but from our own store teams and from the wider policy and culture piece too.”

For The Body Shop specifically, the past 20 years have also seen the brand change hands twice – from the founding Roddick family to L’Oreal, and latterly from L’Oreal to Natura.

Campbell added that The Body Shop’s decision to launch the refill format with screw-cap aluminium bottles was taken to bring the concept to market “as soon as possible”, noting the challenges brands have faced in maintaining recyclability, durability and cleanliness with more complex packaging formats.

Going forward, she is anticipating the introduction of a bottle with a pump by the end of 2020 and for refill stations to be installed in other UK stores within the same timeframe.

The launch of The Body Shop’s refill offering comes at a time when several other British retailers are foraying into packaging-free offerings for the first time or expanding their existing offers in this space. Waitrose & Partners recently extended its ‘Unpacked’ offering of following a successful trial of the concept at its Botley Road store in Oxford, for example, while Marks & Spencer (M&S) is offering customers a discount for bringing reusable containers to its Market Place counters for meals-to-go.

Refill options are also in the research and development stage at firms such as supermarket giant Sainsbury’s, luxury cosmetics brand Estee Lauder and hoteliers IHG and Marriott International, against a backdrop of “mass unwraps” at checkouts, media exposés on the plastics recycling industry and petitions for plastic-free services.

And if there is an industry suffering from a loss of British consumers’ trust more than big plastics and big recycling, it’s retail.

According to this year’s Consumer Action Monitor report from the Ombudsman Services, retail was the most complained-about sector in the UK between June 2018 and June 2019. Moreover, 1,234 more store closures than store openings were recorded in Britain during the first half of 2019, with business rates for brick-and-mortar locations broadly rising and many shoppers switching to online purchasing.

Campbell admitted that the fact that The Body Shop operates through three channels – its stores, its online offering and its 19,000+ “at-home” consultants – has helped it to weather this challenging environment. But, key to the brand thriving against this backdrop, in her view, is its ability to showcase experience and a purpose beyond its products.

“Offering more than just a product is so important because there are simply so many brands out there, with many pushing high volumes of product in a way which simply isn’t sustainable environmentally or for long-term success as a retailer,” Campbell elaborated.

“Customers don’t want to come out shopping to pick up a product – they want to have an experience and a conversation.”

The refill station forms part of this experiential approach and is complemented, at the Bond Street store, by a so-called “activist workshop”. This space gives visitors the information and infrastructure they need to get involved with good causes on an international, national or local scale, including an interactive screen, a noticeboard and a donation box. The first causes to be showcased in this way are Plastics For Change, which is striving to expand the plastics recycling economy in developing nations, and anti-period-poverty campaign Bloody Good Period.

The idea, Campbell told edie, is to give shoppers a place where they feel comfortable discussing issues that matter to them with each other and with staff  These conversations will be taken to the next level by activist-led events hosted at the store – something made possible due to the fact that most of the store’s fixtures are on wheels and can be moved around to temporarily change its layout.

“London is a very diverse city, which is great, but it’s also very fast-paced and somewhere that it’s easy for people to lose their sense of connection and community,” Campbell said.

“The activist voice here is really about bringing back that sense of community spirit, and we decided on London because this is one of our busiest and most high-profile stores.”

In a bid to take this mission outside of the capital, Campbell explained, The Body Shop has set a goal of starting meaningful conversations in every major city where it has a presence. And, given that the idea of a dedicated “activist hub” came from one of the brand’s store managers in the first instance, she believes that gaining employee buy-in will “come naturally”.

The Body Shop’s international director of CR and campaigns, Christopher Davis, has blogged exclusively for edie on the topic of creating the right foundations for corporate activism. You can read his blog in full here.